The thing driving the rental car down dark Irish country roads at midnight wasn’t the diesel engine. Not entirely. It was my expectation that in the warm perfumed hours after midnight, Sea Trout would be entering the river Argideen through the estuary my home looks over. And that I would land one to make my homecoming float the realm of the perfect dream. I hadn’t fished the river since April, and with sparse result then.But the thought of the whole month of June in which to fish, a prime month in the life cycle of both fish and fisherman, acted like an autopilot. I had a quick look at the river – it was high and the tide was pushing the river up –  went home and unpacked and was back at the water’s edge at 0330 a.m., about an hour before sunrise.

Everything felt script-perfect; the air was warm; the river was pushing its way to the ocean; an otter family peeped and splashed on the opposite bank.  I cast my fly into the darkness and waited for that tug that turns the angler into a human electricity conductor. It didn’t come. As the sun made its warmth felt and light leeched into the darkness, I tried a few spinning lures, with the same result. Nothing. Back home at the cottage, intending to cull my inbox, I fell asleep on the couch, and was woken by a call from Peter Wolstenholme, my fishing companion and guru. “There’s no fish in the river,” said Peter, a little disconsolately. “They are either very late this year or have run straight through on a couple of brief floods we’ve had. It’s all very strange and disappointing.”

Disappointment doesn’t trump expectation, especially when you’ve travelled thousands of miles to your “home” river. It does take the keen edge off hope, but it doesn’t blunt it completely. Not even if you believe only 50% that “it’s not about the catching, it’s about the fishing.” So, on that very same morning, a pattern took shape that was repeated for almost the whole of June, a pattern that revolved mostly around my confidence in a river system I’ve known for 25 years. Every morning and evening I checked the weather forecast to see if it might rain, as it normally does in most Irish summers. But the digital weather soothsayers were far from encouraging. Usually a downpour raises the river level and encourages Sea Trout and Salmon to start their journey upstream.  But no downpours were expected for a while. Suddenly the expression “not a cloud on the horizon” seemed ominous. Every morning and evening, and sometimes around midday too, depending on tides, I went to the river and walked the lower pools to see if the fish had decided to come and await a flood before heading upriver; and every day I reported on our network of mobile phone contacts and social media that “there are no fish in the river.” Even when the rain crashed out of the skies for a day, the river rose very little and was still so clear you could count the stones on the bottom. But not the fish, because there were none to be seen.

One day it poured down, not quite when the weather gurus said it would, but who cared? And the river rose and turned muddy and fast while hopes rose at the same pace as the river. But the next day the river was just a little higher, as clear Ballygowan mineral water and utterly devoid of fish. Except – in my case – for one small Brown Trout that I swear I caught last year in the same place. 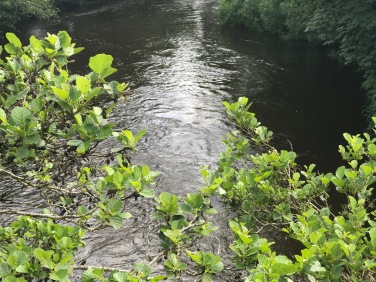 Eric Long, another fishing friend and guru, wondered if the fish had been hoovered out of the ocean by industrial fishing ships. Others asked if they had somehow been netted by poachers. There were others, too, who thought and talked about climate change and the warming of the oceans as a possible culprit. The truth is that nobody knew except the fish, and they weren’t saying. There was one inescapable fact. Ireland (and much of Europe) was having a proper let’s-go-for-a-swim summer. The press was full of records and projections. Shops ran out of Ice cream. The sun beamed down as my visiting sister Joanna and I toiled on the patio garden.  Looking out from my kitchen window you could be forgiven for thinking you were on the Mediterranean.

It was a bona fide heat wave. Always green, even in a drought, West Cork looked lush, fecund and positively spoilt for sunlight and water in equal measures. The hedgerows became hedgegrows.  There were people in shorts in Clonakilty’s main street and the garden centres were overgrown with customers and carts awash with colour.

But the belief the fish would come, that I would make contact with at least one mysterious bolt of silver from the deep, kept my sense of expectation high. Joanna and i , worked on my cottage, visited garden centres, and gave ourselves a day off from weeding and furniture varnishing and went whale-watching with West Cork Whale Watch .(www.whalewatchwestcork.com).

Whale watching is a relatively new thing for West Cork but the incredible number of specimens you can see was listed on a poster on the board of Colin Barnes’ comfortable catamaran as we headed out under cloudless skies. 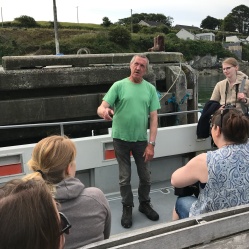 The stars of the show, the Humpback whales which breach and crash and show their massive tails, were somewhere further down the coast and many of the other specimens are not so ostentatious in their stage show.But Joanna and I were treated to lots of Minke whales and a circus of performing dolphins and seals. An unforgettable day. But not exactly what I needed out of the ocean.

The fish still failed to be seen. The river association held a clearing party to clear overgrown paths and banks for its small band of anglers. It was a jolly and industrious afternoon and left our riverbank looking positively Capability Brown, rather than photographer Mike Brown, who blazed a barber’s trail through the grass of the famous Bridge pool.

During that exercise under a bright sun, people reported seeing a few fish, some of them young Salmon or Peel.

The network buzzed with facts, fancy and speculation. Suddenly anglers started turning up for the draw for pools, a time-honoured gathering at Inchy bridge about half an hour before dark. I couldn’t work out whether it was excessive hope over experience or better fish-spotting, because I had only counted one Peel and three fish in weeks of Polaroid perusing. I fished a couple of nights, without a touch.  And told myself that the fish would be there before I no longer was, towards the first week of July.

One night I was supposed to meet Peter at the bridge to fish and chat but was too tired from an afternoon of shunting stones and earth around my tiny plot. So, I didn’t go at the allotted hour, which found me asleep instead.

The next morning, I got a message from him saying “Where were you last night. Haven’t you seen my picture on Facebook mssenger? ” The question turned my imagination into a froth of excitement. If anyone is going to take a fish on the Argideen, even in a fallow year, it’s the Yorkshireman with the Heron hair-do and the off-white car coat and green rubber boots. The answer came after a few nervous minutes in the shape of a photograph of three beautiful young sea trout arranged on a kitchen counter for a trophy photograph. Not big, but “schoolies” or “juniors” making their first foray back to their place of birth.

I was too impatient and excited to continue the conversation over WhatsApp or Facebook messenger, and rang Peter straight away.

“Where did you get those fish.” I asked.

“About halfway up the Big Flats pool between midnight and one a.m.” he replied.

“One of me’ golden ball flies with a bit of silver in it,” he said.

“Terrific,” I replied. “Will you be going up the river tonight.”

“Probably not,” he said.

“Why not?” I asked with surprise. Few fish with Peter’s boundless appetite.

“I’ve really got you going now, haven’t I? ” said Peter. “Those  fish in the photo are ones I caught last year. ”

And made arrangements for an alternative fishing expedition. For one brief moment there, all my hope and expectation had run amok, only to be crushed by the truth.

April Fool jokes are supposed to do that too. Is this why, in French, they are called a Poisson D’avril? 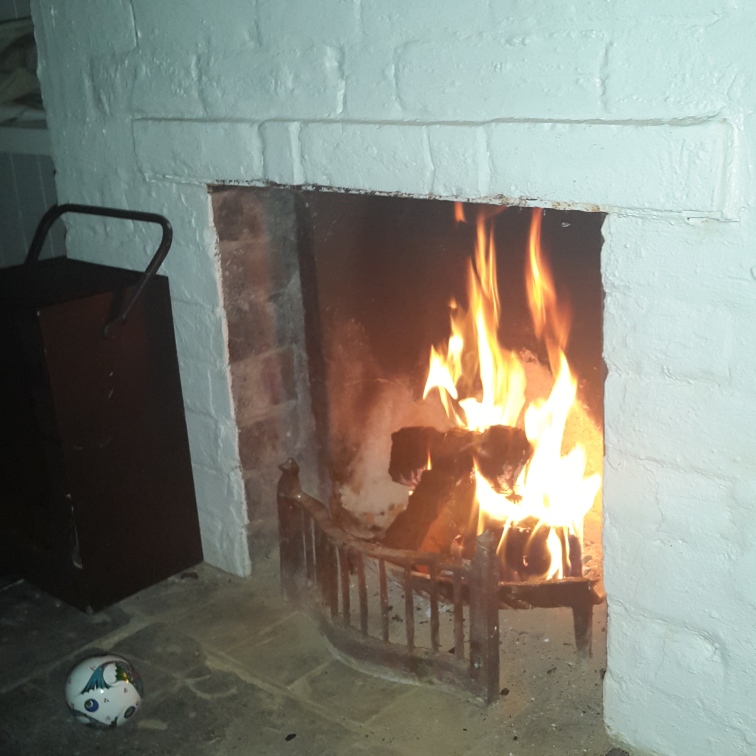 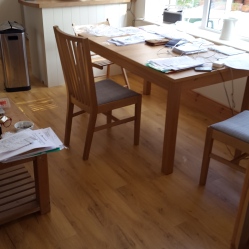 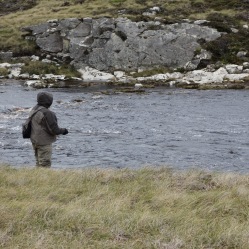 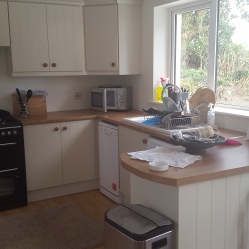 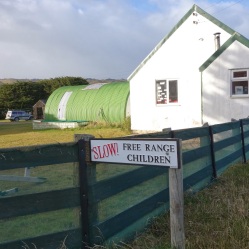 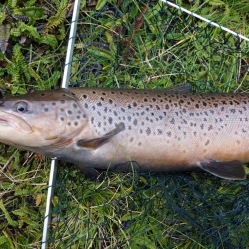 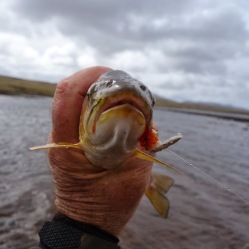 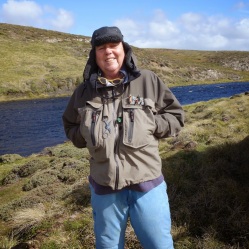 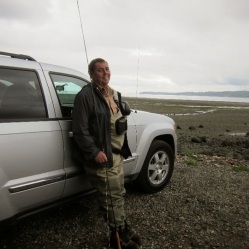 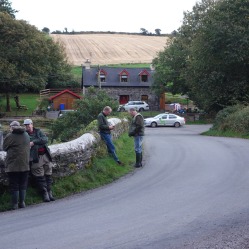 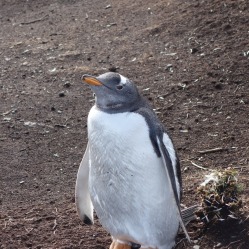 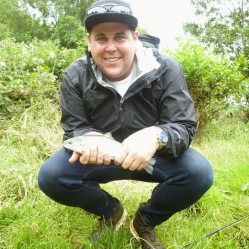 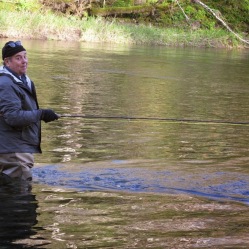 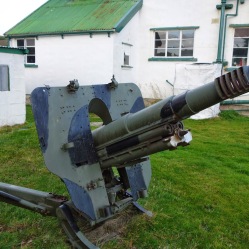 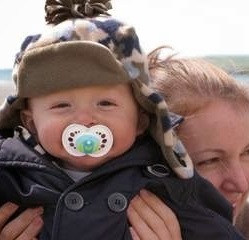 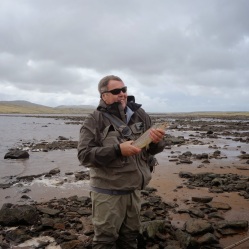 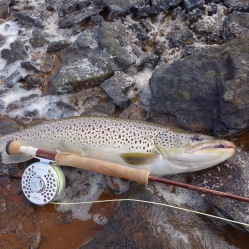 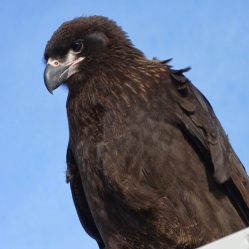